A Course in Miracles Original Version 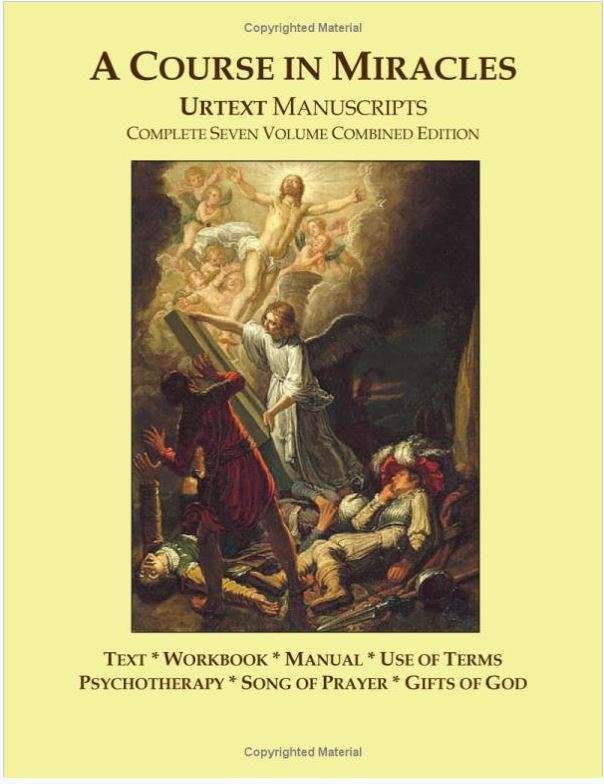 A Course in Miracles Original URTEXT version (ACIM URTEXT in short) is an UNEDITED collection of all seven volumes which were dictaded to Helen Schucman during the 1960 and 70ies. It comes in two bindings.

I have the yellow binding. This huge original version always reminds me of the yellow pages of a big city. It is that big and that heavy.

The Official Course in Miracles

There was quite a debate at the beginning of the millenium which of the many different version can claim the tag “ORIGINAL”. The original short-hand notes from Helen Schucman of all SEVEN volumes have been declared as public domain in a court sentence in 2003. 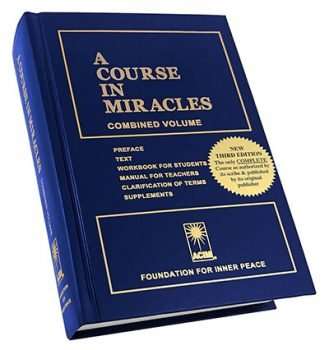 The most widely known version in the world of A Course In Miracles (ACIM) is the blue book, published by the Foundation for Inner Peace, short FIP. On Amazon.com you will find the absolutely best price.

This 2nd edition of A Course in Miracles is called the FIP version in ACIM circles. The Foundation for Inner Peace or FIP have the  copyright on this edition and on all the translations into more than 25 languages in the various corresponding countries.

Most of us ACIM students begin with this version, as we are introduced to it as the official version. The book is handy and includes the FOUR most important volumes:

Which ACIM Version to start with?

I started my study with this blue official ACIM book and I would recommend you do, too. When I go travelling I usually take this book along, since it does not occupy too much space. I also have it on my kindle. But I like to underscore and add notes with a pencil in the book. So nothing can replace the printed version official version of A Course in Miracles.

That said, if you are serious about your study of A Course in Miracles, the ACIM URTEXT is a MUST!

The ACIM URTEXT is a MUST!

A ton of material is missing in this blue offical version of A Course in Miracles, especially in the beginning chapters of the course. Helen Schucman and William Thetford edited out all material which they deemed to be personal instructions for their eyes only.

It was probably the right thing to do at the time in the early 1970ies, as the material was very controversial when they published the heavily edited version. A lot of explanations about sex, homosexuality, relation ships, and the relationship between mind and consciousness have been edited out.

It is said that about 40.000 words are missing from the TEXT alone. Just think that about 400 words fit on one page – so there are about 100 pages of important text missing. If you become really serious in your study I would definitely recommend to also get the ACIM URTEXT.

A Course in Miracles ORIGINAL Urtext

A Course in Miracles Original URTEXT MANUSCRIPTS is a collection of the very first dictations of the course as received by Helen Schucman.

Doug Thompsom devotedly compiled the seven volumes, which are in PUBLIC DOMAIN since 2003, and made them available online and in print through the Miracles in Action Press, LLL – short MIAP. 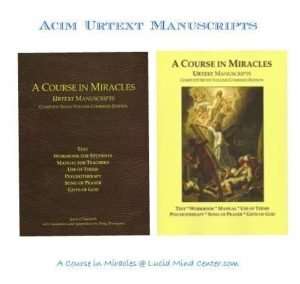 On the photo you can see the 2008 version of the ACIM URTEXT with two different covers. This version contains all SEVEN volumes of the course. It is currently out of print, but you can still get it on Amazon.com.

This version is thick and heavy and contains a lot of very important text which is not included anywhere else. In Doug Thompson’s own words:

I would have never understood ACIM’s explanation of human consciousness had I not closely studied the URTEXT version.

A new version in print called A Course in Miracles THE ORIGINAL DICTATION EDITION came out in 2013, but has become unavailable again since.  It includes an eighth volume called Special Messages and the “Pre-canonical Notes” for the first time in print! You can see the first two chapters ONLINE here of the new version.

Here you can DOWNLOAD a good pdf-version of the URTEXT of A COURSE IN MIRACLES – the link will open in a new window. Save it to your PC and print it if you like. This includes the special messages, but does not contain the WORKBOOK with the 365 lessons.

I often use this pdf version on my computer when searching for specific words or sections in the TEXT, as it returns the search results rather fast. Also can be used on iPAD.

On WIKISOURCE you can find the four complete A Course in Miracles volumes: