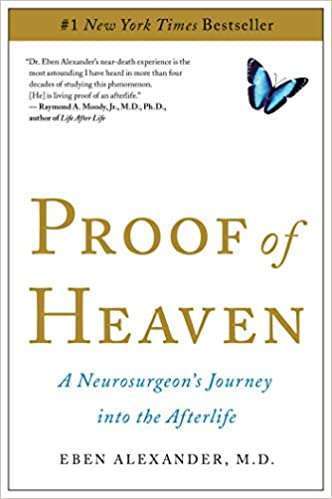 The very interesting Near Death Experience of Dr. Eben Alexander occurred during a seven day coma caused by a severe bacterial meningitis. To everyone’s surprise he recovered from being virtually brain dead to a complete recovery without any traces of damage to his brain or body.

When he first woke up from the coma he suffered from a strong amnesia, where the only thing he could remember was his extended adventure into the many dimensions which lay beyond the physical realms. Dr. Alexander’s experience is unique in the sense that his understanding of the functions of the human brain are staggering due to his profession as a neurosurgeon.

From Sceptic to Knowing

After the NDE he converted outright from a “scientific reductionist” who believed consciousness was a product of the brain to a deep knowing that our mind and consciousness exist apart from the body.

He says in his own words about the scientific belief: “The sceptical scientist who is addicted to the simplistic dogmatic reductionist materialist world view will go the way of the Dodo bird (in other words: extinct). Once people open up to the possibilities, it is mind-blowing what is out there!”

Many of the typical elements of the NDE were part of Dr. Eben’s experience beyond death. He describes a deep sense of peace, a portal into another world, the all encompassing knowledge and the presence of pure love manifested by this beautiful girl sitting on a butterfly wing.

Months later the meaningful appearance of this beautiful girl, which he had not met before in his real life, gave him confirmation of the reality of his experience.

Eben Alexander was given into adoption when he was two weeks old. About a year before the coma he finally visited his birth parents for the first time, where also met his biological sister and brother. The younger sister, Betsy, had sadly died some years earlier.

A few months after his coma, his birth family sent him a picture of Betsy and suddenly he realised that the beautiful girl on the butterfly wing was his younger sister who had passed away. In this video he tells the story to Dr. Raymond Moody who is part of the audience. You can read the whole story in his book Proof of Heaven, a Neurosurgeon’s Journey Into Afterlife. In his book he includes an analysis of his medical condition during his coma and NDE, and selections of the material he wrote down in the six weeks after his near death experience.

He explains that our materialistic world view leads us away from the fact that we are divine beings, pure consciousness and eternal spiritual entities. He talks of God and the importance of prayer.

After his coma, Dr. Eben Alexander had a strong desire to understand what actually happened and find like-minded people. Soon Dr. Alexander discovered the Monroe Institute, which has as its mission the Exploration Human Consciousness, pretty much what we have as our mission here at the Lucid Mind Center. Eben Alexander participated in some of the Monroe Institute’s residential programs in the early 2010s. Using the institute’s powerful Hemi-Sync technology helped him learn specific techniques to return to this wondrous non-physical realms he explored in his NDE. If you would also like to try to explore similar states to near death experiences, we recommend Into the Life for Near Death Experience Meditations.

“Created and voiced by near-death experience (NDE) researcher and speaker Scott Taylor, the program is based upon the analysis of more than 6,000 case studies of near-death experiences. The exercises — Reunion, Life Review, Cities of Light, and Realm of Knowledge — are designed to be used many times. You can expect a different experience each time, and you’ll find your experience of the physical world will become richer as you gain more perspective from the nonphysical.”

Did you have an NDE?

Did you have an NDE or witness an NDE? I would love to know. Each and every story is so fascinating and no matter how little or how much you have experienced I will love it.