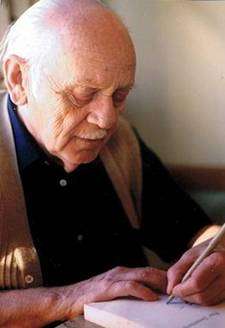 Here you can find everything about Robert Monroe: From his Hemi-Sync technology to the Monroe Institute. Read about his Out of Body Experiences. Find a biography of his eventful life and reviews of his three books.

Robert A. Monroe demystified the occult

By recording his out of body experiences with a scientific approach, Bob demystified the natural human states that lay beyond the physical. He popularized the expression Out of Body Experience or OBE in the 1960ies, which until then were widely called astral projection or astral travels.

With his meticulous investigations and experiments, he made it possible for anyone to follow in his footsteps and find out for themselves what lay deep under the wakeful consciousness. By following his path many lost their fear of death.

How it all began

One night while Bob was trying to fall asleep he was thinking about next days gliding and suddenly he found himself bumping against something. It turned out to be the ceiling of his bedroom. Read on…

Bob wrote three books, each descibing a new stage in his understanding of altered states: Journeys Out Of The Body, Far Journeys and Ultimate Journey (on Amazon).

With Hemi-Sync you can learn to focus your attention, deeply relax or meditate within a few sessions. It can even alleviate ADD/ADHD symptoms, pain and fear. Learn more about Hemi-Sync

At the Monroe Institute you can explore deep states of consciousness. You can even learn how to OBE, bend spoons, influence dice or manifest your desires. Read more…

Robert Monroe’s mission was to make Hemi-Sync available to anyone in the world. Nowadays there are hundreds of albums available in 10 different languages. Check out the Hemi-Sync Albums.

Owning radio stations and cable TV companies, Robert Monroe became a millionaire by age 40.  He had become a specialist in sound technology and intrigued by the possibility of influencing people’s emotional and mental states with sound.

Could you make a person relax or fall asleep? Could you wake her up or make her super alert with recorded sound and verbal instructions? Could you undo fears? How to influence a person’s state of mind, and help people explore consciousness?

And after a lot of trial and error, together with a team of scientists, Campbell and Mennerich, Bob Monroe figured out how to do just all that.

They experimented around until they rediscovered binaural beats. They realized these binaural tones mixed with verbal instructions and other sounds effect could help people explore deep states of consciousness. Monroe felt that this discovery was so important, that the word needed to get out there.

To get an idea how this technology works you can listen to a 3 minutes FREE Hemi-Sync trial with the verbal instructions of Mr. Monroe himself.

Before Hemi-Sync got released to the public, Monroe and his team had the recordings tried and tested in over 800 sessions with dozens of different volunteers.

Robert Monroe took a patent on Hemi-Sync, and created hundreds of Hemi-Sync recordings. The Monroe Institute was founded and residential courses were offered to the public.

To give you an easy overview of the most important events in his life I have created a 3 part biography written in bullet points:

The most significant events in Robert A Monroe ‘s childhood and youth, the first marriage and his financial breakthrough at age 25.

Bob becomes a millionaire, marries a 3rd time, and has his first children. A sudden OBE at age 43, the first of many, changes his life slowly but surely.

Bob starts a new life at 55! He marries his 4th wife Nancy, publishes 3 books, creates Hemi-Sync and builds and founds the Monroe Institute.