The Gateway Voyage is the core program of the Monroe Institute. It was a totally life-changing event for me. I participated in that residential course in 2010. When looking at my life in retrospect there is a definite before and after.

The Monroe Institute offers the Gateway Voyage in many different countries in various different languages. I participated in Buenaventura, a sleepy idyllic town near Toledo in Spain.

I had read so much about after life, near death experiences, meditation, enlightenment, kundalini awakening, chakras, vision, lucid dreams, out of body experiences, healing and so, so much more.

But after I had discovered the books from Robert Monroe and his promising technology called Hemi-Sync, I knew I had to try out if I could get into altered states on one of these courses offered by the Monroe Institute.

A Course in Miracles

Seven days before I embarked on the Gateway Voyage, I had just finished the 365 day self study course of A Course in Miracles (ACIM) and had already experienced a profound change in the way I perceived my surrounding world. In a way, thinking back, my understanding of it was all on a theoretical or intellectual level, if you will.

The Gateway Voyage put all the theoretical and intellectual understanding in to a practical, emotional and mind-expanding experience. Of course, I did not reach all the understanding in the six days I was at the course. It was more of a drastic and sudden opening up and cleansing process which started there but carries on into the present. 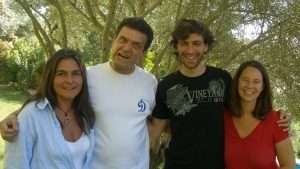 On the far left myself with two of the seven participants and one of the Monroe Institute ‘s facilitators. I met the lady, Marzella, on the far right at this course. The parallels between our lives were staggering and we ended up becoming the best of friends.

Marzella’s life got another turn, just like mine. She has since qualified as psychoanalyst and natural healer in Germany. You can check out her website Ihre Psyche here.

Doors opened to my inner awareness and in my case many doors amongst them to my subconscious and to my super-conscious. All my senses heightened. Now I experienced first-hand what it meant to perceive with an expanded awareness.

Months later I realized that I had experienced a Kundalini awakening on the second day of the course. To tell you the truth, my emotions were in turmoil and in a mess after the six days in Toledo.

It felt as if someone had taken a big spoon and gave the stew that was the belief-system of my ego several good stirs. I was already a little confused by A course in Miracles. But the Gateway Voyage had me up side down.

It felt like I had been gone for a decade!

When I came home after being away from my family for less then a week, I was mentally miles away – stuck on a different planet – a different plane of awareness.  It felt as if I had been gone for a decade! I believe people who had had a near death experience probably felt the same. I was so detached from what my life was at the time. I took me 2 to 3 weeks to touch ground. Once I did, I slowly began changing my life.

Others perceived me beaming with happiness or some other light which they were attracted to in me. They also perceived me to be a lot calmer and less prone to anger.

Not a smooth ride

But it was not a smooth ride coming down to the reality of the World. My husband can confirm that. I had some very low downers in the months or year after, which always came just before a major break-through in my understanding.

In retrospect, who can say that it was not all planned on a higher plane just like it occurred all along? It did hit me, after all, at the famous female mid life crisis around age 40.

This video Awakening Consciousness reminds me of my very personal Gateway Voyage and sensations I had at a two-day course with Hemi-Sync:

Still puzzled by my Gateway Voyage

Still now, years later I am still unravelling the inner visions and encounters I had during that very first experience with Hemi-Sync on that Gateway Voyage. I also have to add, the meaningful changes did not only occur because I listened to the recorded exercises, but because of the people I met at the program and the emotions they evoked in me: like, dislike, anger, love, friend-ship, jealousy, gratitude, joy, laughter, etc.

Not everyone who participates at the programs and seminars offered by The Monroe Institute Programs experiences a profound change as I did. Or maybe they cannot tie their subsequent changes to the events and encounters in the residential course. It does not really matter. What really does matter is that we wake up and allow our minds to become lucid again: fully awake and conscious.

It has been more than 10 years that I have participated in the Gateway Voyage in the month of May. In September of the same year I had a full Kundalini Awakening, which was not a smooth ride either. I hope that one day I will make the detailed account of this course and other deep experiences I have had, and important messages I received available to you.

Maybe I just need to meet the right person or group of people, who will help me with this giant task of bringing the insights and wisdom of the courses I participated to you. When the time comes I will let you know here and on the  social media platforms.

But what about you?

Have you been to a course or workshop? Did you have some profound changes? If you can’t go to the Monroe Institute – let it come to you! You can either participate in one of the online courses or download the Gateway Experience and do the course at the comfort of your own home. If you like I can guide you through it.